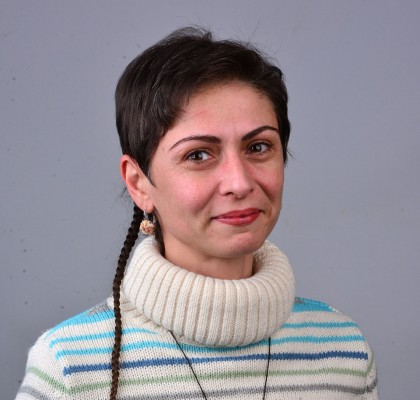 Panel of Education on Communication from the Past to the Present

Assist. Prof. Dr. Naile Berberoğlu graduated from Eastern Mediterranean University Faculty of Communication in 1999. During her undergraduate degree she published articles on childhood and pedagogy. She took part in a research project which focused on the critical political economy of electronic media in North Cyprus after 1974.

She completed her MA degree with on the sociological framework of domestic violence against children using communication theories at the Eastern Mediterranean University in 2004. She completed her doctorate at the Department of Sociology and Communication at the York University in England in 2013. Berberoğlu has been using the name Davita Günbay in her private life since she was 21 years old and she is most commonly known by this name. After returning to Cyprus in 2015, she taught at the Radio-Television-Cinema Department at Girne American University, and started working as a full-time faculty member at the Faculty of Communication at the Near East University since the fall of 2016. Besides the undergraduate courses she teaches in the Department of Film Making and Broadcasting she also teaches courses in the MA and PhD programs offered within the Faculty. Berberoğlu is currently the Faculty coordinator for the Double Major Program.

She has delivered presentations at various conferences in Scotland and England and has published articles and book reviews in international journals. She prefers to use multiple compatible methods and discourse analysis in her research and continues to work within the framework of critical cultural studies on a variety of topics such as (un)equality, discrimination and education.

Her recent research interests include the subjugation and discrimination of refugees.