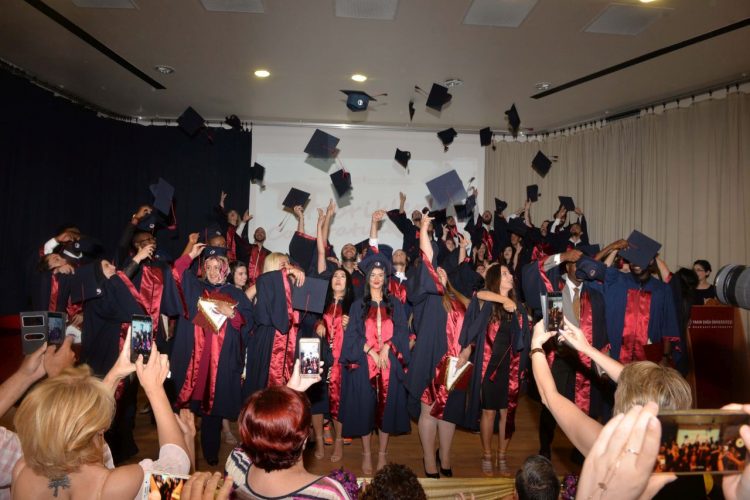 According to the press release issued by the Directorate of Press and Public Relations of Near East University, the graduation ceremony was recently held to which Vice Rector of Near East University Assoc Prof Dr. Murat Tüzünkan, Deans of faculties, Heads of Institutes, academicians, students and guests attended.

In accordance with the conventions, the ceremony began with a minute’s silence, followed by the national anthem. It was stated that a speech was made by Vice Rector of Near East University Assoc Prof Dr. Murat Tüzünkan, Deputy Deans Assoc Prof Dr. Fevzi Kasap and Assist Prof Dr Nuran Öze, and Valedictorian of the Faculty Batu Özsusuzlu made a speech on behalf of the graduating students; whereas Tapiwa Svanda made a speech on behalf of the graduating overseas students. Moreover, it was stated that the musical performance of a faculty student, Ali Cem Gül, added an additional ‘flavour’ to the ceremony.

Batu Özsusuzlu: “We are here to put a stop to a journey that we thought would never come to an end…”
Speaking on behalf of the students Batu Özsusuzlu stated that they were present there that day to put a full stop to a journey which they thought would never come to an end. He said that as he began his university life, he could not even imagine the day that he would be graduating.  He said that in fact, he ha no idea on what a Department of Visual Communication and Design was about. He also said that he switched from the Faculty of Dentistry to this branch, which astonished those who heard it. He ended his words by thanking his family, friends and teachers for their full support throughout his study.

Assoc Prof Dr. Fevzi Kasap: “Adopt Human Rights and Ethical Principles …”
In his speech, Deputy Dean Assoc Prof Dr. Fevzi Kasap he congratulated his new colleagues and advised them not to lose contact with their university wherever they ae and under any circumstances. He also asked the graduates to adopt human rights and ethical principles no matter which sector they end up working in.

Assoc Prof Dr. Tüzünkan: “Faculty of Communication prepares our students to be among the best in the world of communication of the future…”
In his speech, Vice Rector of Near East University Assoc Prof Dr. Murat Tüzünkan expressed that the Faculty of Communication at the Near East University, which is an international science platform, has implemented an educational program based on science, technology and international standards in the light of universal values.

Tüzünkan: “Our faculty makes a difference in communication education with television, radio and animation studios and basic design studios that offer theory and practice together and prepares our students to be among the best in the world of communication of the future. In addition to traditional knowledge-based education, we provide journalists, filmmakers, TV players and academics to the society by providing them with a training that enables them to carry out teamwork, creativity and self-discovery.”

Near East University is applying 4th Generation University Model…
Vice Rector of Near East University Assoc Prof Dr. Murat Tüzünkan expressed that Near East University is applying 4th generation university model and that with this it is continuing to grow by improving itself every year. He added that the NEU has the aim of increasing scientific contributions to industry and society, producing science for the society, spreading its works to other segments of the society and developing its projects in a way that will contribute to the society. He assured that they, as the university, will continue to put into practice all kinds of innovations for the upbringing of modern young scientists who are competent in the scientific field, researching, questioning, interpreting, while adhering to ethical values.

Graduations are not an end but rather a new beginning!
Vice Rector of Near East University Assoc Prof Dr. Murat Tüzünkan addressed the graduating students and said that graduations should not be perceived as an end; but should be comprehended as a new beginning. He said: “with the opportunities provided by the Near East University, you have been equipped with modern and accurate information in high technology-based facilities. I would like to advise you to keep your horizons broad with the information you have acquired, continue your lifelong learning, refresh your knowledge, and your goal will always be the world. Undoubtedly, you, who have grown up with the philosophy and culture of the Near East education, will always be in favour of rights, law and ethical values ​​throughout your life. Furthermore, you will demonstrate the capacity to reverse any outdated thought that has persisted with a stereotypical and rote approach. Wishing your success will inspire students who will graduate after you!”

Outstanding students were presented medal and diplomas…
Subsequent to the speeches outstanding students were presented their medals and diplomas by Vice Rector of Near East University Assoc Prof Dr. Murat Tüzünkan. Later, all graduates were awarded their diplomas and the ceremony ended with the tossing of graduation caps in the air. Also, after the ceremony, an exhibition was opened with project demonstrations of graduating students.